Here is my formatting guide in an attempt to keep us as consistent as possible going forward.

First up, a few points to follow to be consistent for language:

When saving the file, follow these rules for names:

Format things will be numbered:

2. The first thing in the document is the description of the series/franchise being covered in this article. Example below

Overwatch is a popular first person shooter video game developed by Blizzard Entertainment. Released in 2016 for PC, Playstation 4 and Xbox One, the game quickly rose in popularity with universal acclaim, favourable reviews, and an open beta that amassed 9.7 million players. With it's in depth lore, unique characters, extensive voice cast and popular competitive scene, the game has stood the test of time, with a sequal appropriately named Overwatch 2 revealed at BlizzCon 2019.

Overwatch's gameplay revolves around two teams fighting over an objective. Most gamemodes have a team defending an objective, while another team attacks to fight for control over it, while some gamemodes, like Control Point, have teams switching roles of attacking and defending several times within any round.

3. Use header 1 (# ) for the large topics like the "List of Figmas", further info on other pages, and references.

4. Header 2 for each figma listed in the page. Name of product as shown in the shop, link to the shop in the header.

5. Introduce the character. Be a bit more descriptive and verbose than my example here. Feel free to talk about this figure's particular appearance/place in its canon.

Genji Shimada was an heir to the Shimada Family. A disagreement between him and his brother caused his apparent death. Broken and clinging on to the last threads of his life, he was found by Overwatch and Angela "Mercy" Ziegler who put him back together but not quite the same as he was before. This figma shows Genji in his default skin from the game.

6. Embed an image from TOM Shop here (if it has a TOM Shop page)

Remove the .webp from the end. 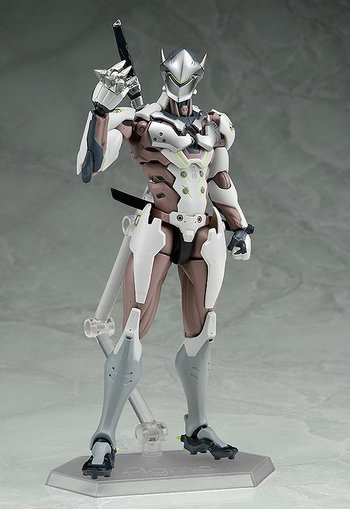 ↑ The client has requested that all images be followed by the copyright below. I know it's wrong, I know that is inaccurate. It is probably a mistake on the client's part, but for now it is the mandate of the client. We will interface with the client directly once they notice and fix it internally.

7. Put specifications and standard figure info into a table. Ignore shared traits between all figmas

I pulled this info from both the TOM Shop and the goodsmile catalog.

Genji's katana and wakizashi are able to be drawn from their sheaths. He is able to hold them in his hands in various poses. He also has a set of shuriken and associated effect parts that imitate the effect of him throwing them.

Ordering/Preodering of this item from (place) comes with (description of item) bonus (if applicable).

Figma Overwatch Genji was initially released on (date) and rereleased on (list of dates) (if applicable).

9. Further information if this series goes over multiple pages-->

This is page 1/5 of a series of Overwatch figmas. Please select from this list of other pages for information on other Nendoroids in this series.

10. Put all references that were used to write the article here

When done, copy all text from the preview window and check the number of characters. I use www.lettercount.com on the recommendation of others, but I have no personal preference.